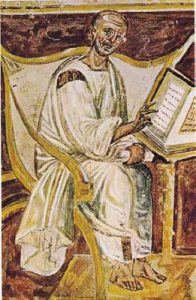 RETURN TO TABLE OF CONTENTS

Early Christianity joined the teaching of the Jewish tradition with that of Greeks. By the time of Augustine (354-430 CE) there has also been considerable influence by Roman thinkers and other religious traditions, such as Manichaeism, an ancient dualistic religion that originally attracted Augustine.

Augustine is perhaps Western Christendom’s most important early Christian philosopher and one of the most important thinkers of the history of philosophy to explore the experience of the human subject. His Confessions tells his own biography, portraying his sophisticated experience of conversion to Christianity. Augustine, who was already a significant scholar of the ancient tradition when he converted, highlighted the inner experience of a questioning soul, who was drawn to various dimensions of human experience and famously prays “God, make me chaste, but not just yet.” It also highlights the appeal of the Christian experience of grace. While the Stoics and others ancient schools of philosophy had emphasized the importance of Logos, the cosmic reason, at work in the universe, the early Christians emphasized the primary importance of a conversion of the heart and relegated to secondary significance the focus on reason. Reason is still important and Augustine stands in a certain awe of the fact that the use of reason is one way for us to understand truths of the mind of God. Yet philosophy in the hands of Augustine and later Christian thinkers is subservient to theology, and is viewed as its “handmaiden,” as the Medievals put it. Reason leads one to faith. In the view of Augustine and other Medieval Christian writers faith completes reason and provides a new theological ground on which reason can systemically work. Philosophy in the hands of Augustine is largely philosophical theology.

Here I can only highlight some of Augustine’s most lastingly significant ideas. One of those concerns the relationship of faith and reason. Augustine believed that God revealed himself and his truths to humans both by the light of natural reason and through revelation. He thus was open to learning from the Greeks and Romans, who, using their reason, had discovered numerous truths about the world that would benefit all people. This early openness to the learning of non-Christian traditions was important for providing Christianity with a strong intellectual orientation. However, in Augustine’s view and that of other Medieval Christian thinkers, reason was only one of the ways that God made truths accessible. Revelation was the other. Augustine saw the two as entwined and famously highlighted, “Crede, et intelligas” (“Believe so that you may understand”). Opening oneself to God’s grace, Augustine maintained, would provide one with a font of experience upon which one might reason. It would expand one’s understanding. But what is true of religious knowledge is true of other areas of knowledge as well, as, for example, Anselm of Canterbury will highlight. Even in the sciences, we only learn after having a belief that those who have developed and passed on the disciplinary knowledge of the sciences are bearers of truth. Learning anything requires an acceptance of ground rules that one at first does not understand. We learn physics after trusting that the physicists have something to teach us and applying our minds to find out what that is. But of course Augustine’s emphasis is on religious faith, which he thinks can open dimensions of supranatural knowledge for those who open themselves to it.

Augustine is known in his early life for having had a concubine with whom he had a child. His mother, Monica, who was a Christian and was declared a saint in the Catholic church, is said to have prayed incessantly for her son and also to have disapproved of his marriage to his partner. Augustine, after his conversion, left his partner; when she died, he went back to take care of his son, but his son, too, soon passed away. Augustine then continued a scholarly life in service of his faith. He ultimately accepted a life of celibacy and ascended in the hierarchy of the Catholic church, becoming the Bishop of Hippo in Africa.

Throughout his life Augustine had a strong sense of his own incompleteness and weakness. Reflecting in part on his own experience, lead him to think that it was not possible to master the moral life without the grace of God. He is thus one of the strong early proponents of the view that without God people are incapable of living ethically. This is a view that does not meet so quickly with acceptance in the twenty-first century when one sees so many examples of ethically exemplary agnostics and atheists. However, the sense of weakness that Augustine felt is similar to that found by many struggling with alcohol or drug dependencies. In the context of 21st century US life, one could see in Augustine a sensibility like that of those in 12 step programs of Alcoholics anonymous and other such programs who feel a need for a higher power to gain control of areas of their lives where they no longer have control.

Augustine did see us as having a natural ability to differentiate right from wrong as well as a natural orientation to seek our own happiness. Greek and Roman philosophical schools provided ample evidence that this was a striving of many in the pre-Christian world. However, Augustine was convinced that we would only achieve a moral life and ultimate happiness through God’s grace. He sees us as having a natural orientation, derived from original sin, toward evil. Augustine was the first to have formally theorized on original sin. But given this tendency, although political entities might strive for conditions that guarantee happiness and fulfillment, they will always fall short. Injustice will always be a part of human reality. Against this backdrop, Augustine develops a well-known view on kingdoms and bands of thieves:

Without justice what are kingdoms but great bands of robbers? What is a band of robbers but a little kingdom?” He is in essential agreement with the pirate’s response to Alexander the Great: “Because I do it with a little ship I am called a robber, and you, because you do it with a big fleet, are called an emperor.

In City of God, another of Augustine’s great works, he lays out his view history as a cosmic struggle between forces of good and forces of evil. Indeed, it can be viewed as a cosmic reenactment of the biblical struggle between Cain and Abel. Humans are fundamentally free. While Augustine will argue that God wills that all accept his grace, he highlights that some will refuse to do so. Humanity can thus be divided up into members of two cities — the city of God and the city of man. Human history progresses linearly toward the final judgment, with people of these two cities in a continual struggle. This history will not end in full justice in this world. Human life will always be incomplete, until the fulfillment of human history in the next life.

Though Augustine thinks that in our original state humans would have been cooperative, needing no law and no political authority, given the fall from grace, political bodies are needed to secure as much social cooperation and justice as possible. A society in Augustine’s view is “a multitude of rational creatures associated in a common agreement as to the things it loves.” Yet, even the best such a society, in his view, oriented toward the good, will only achieve partial justice. Ultimately, human states will fail. The formal church too may fail, but the City of God, that of true believers, promises fulfillment. Our full happiness, our fulfillment is only possible in the next life, and it is only possible for those who accept God’s grace.

Augustine offers a view of life that joins traditional philosophic concerns with the newly dominant Christian religion of the Roman Empire. But in Augustine we do not see a philosopher in the traditional Greek sense. Rather, we find a thinker reasoning on the basis of many tenants of his religious faith. The linear view of history that Augustine offers is unique and his views on time consciousness are important. But his views of original sin, his views about the inability of humans to live morally without God’s grace, his assumption of an end of time and his imaginings of a final religious judgment are articles of his faith not points for which he is able to offer a convicing independent philosophical justification.

Augustine’s views of humans as fundamentally weak and sinful resonate with his own experience of himself and the traditions of Christianity emphasized by St. Paul, as well as the Manichaeism that he advocated early in his life, which viewed the world as divided into a force for good and an equal force for evil in continual struggle.

Augustine’s faith underlined his view that we cannot expect happiness in this life, but that with spiritual experience, we can prevail. And there is a promise for the next life. In part his pessimism might be attributable to the period in which he lived. Christianity had only recently become the official religion of the Roman Empire. Many were still believers in the traditional religion and questioned the decisions of the empire to convert. But that clearly is not sufficient to explain his continued appeal. In broad contours, with or without the elements of his faith, his pessimism about the human condition continues to appeal to “political realists” who do not expect much from the human condition and who think it only realistic and helpful to hope for a state in which people can continue their conflicts with at least some boundaries of peace.

Augustine — Video from School of Life